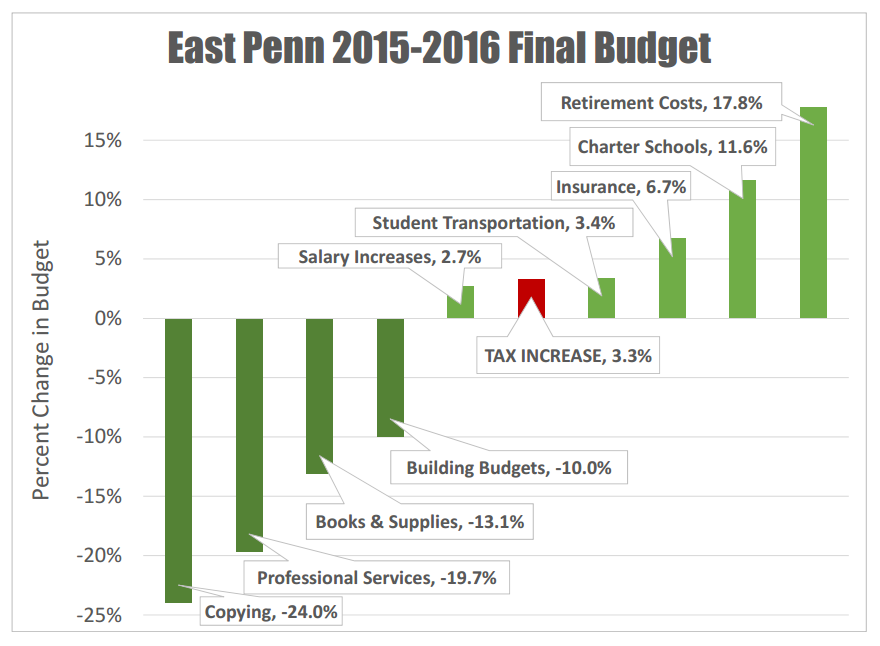 Discussion of the school district budget threatens to generate far more heat than light each year.  Here are five key points that will help you stay informed and avoid some common misconceptions about school finances.

#1:  There will be budget cuts, but no program cuts.
This is a tough budget for our schools.  Spending on books and supplies is being cut more than 13%.  School principals must cut building budgets by 10%, impacting things from the purchase of sheet music to the replacement of microscopes.  The district copying budget has been cut by 24%, the purchase of professional services by 20%, and more.  The budget does nothing to solve the growing class size issues in the district or provide significant updates to aging computer technology in the classrooms.  The good news, however, is that– unlike many PA districts– East Penn is NOT cutting any programs this year.

#2: The biggest cost increases are outside of local control.
The district’s required contributions to retirement programs are rising a whopping 18% next year.  Payments to charter schools are rising 12%.  These two items alone require $1.95 million in new net spending.  Our school board is not allowed to adjust these costs; they are mandated by the politicians in Harrisburg.    Many other cost increases are due to unfunded mandates by state and federal authorities too.   If there is one thing I’ve learned from my two years on the board, it is that the local school boards are used as patsies by state lawmakers.  They pass lots of new requirements for the schools each year, but leave local school boards holding the bag to pay for them all.

#3: There will be a 3.3% tax increase next year.
As already noted, the district faces some huge cost increases that are required by lawmakers in Harrisburg.  The 3.3% increase translates into an additional $101 in taxes for the owner of a $200,000 home.  Even with this additional revenue,  a structural deficit remains in the budget, meaning the district will spend more money than it takes in.  This deficit will be financed by dipping into reserve funds normally set aside each year for emergencies and unanticipated expenses.  I put together the chart to show where the 3.3% tax increase fits in the context of the budget cuts and budget increases for the 2015-2016 school year. Data source: EPSD General Fund Final Budget Draft 6/17/15
#4: School board member are not paid.
School board members are unpaid volunteers who represent the community in governing the East Penn School district.  The district budget represents many months of hard work and negotiation for the good of students, taxpayers and everyone else who lives in the district.   People who criticize the budget as board members ‘voting themselves pay raises’ don’t know what they are talking about.

#5: My opinion: I will hold my nose and support this budget.
There is lots not to like about this budget.  At the same time, it is a responsible, compromise budget.   It spreads the pain around: students will continue in crowded classrooms, teachers will have to do more with less, administrators have smaller budgets and will be without the SRO they had hoped to hire, and taxpayers will face a modest tax increase.  The budget makes tough cuts, but does so to preserve the core strengths in the district.  There will be no teacher layoffs, and the schools preserve important programs like art, music, athletics, and foreign languages.   Over many hours of discussion with the administration about the budget, and studying a tall stack of budget documents myself, I also believe 3.3% is the lowest fiscally responsible tax increase possible right now.

As you might imagine, the $141 million budget for a district that employs hundreds of people and educates thousands of students is a complicated one.  Things are made even more complex by the hundreds of laws and regulations the district, and its budget, are subject to in PA.   Detailed budget documents are available here.  I would also welcome questions, conversation and/or criticism about the budget.