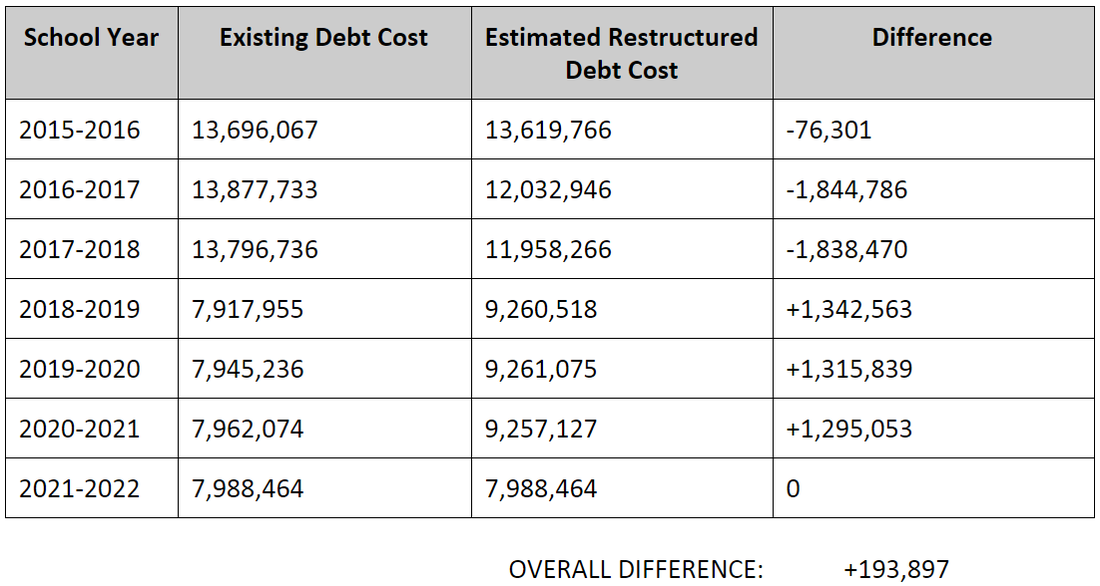 Did you know that the East Penn School District will spend $13.7 million this year on debt payments– paying back money borrowed in the past?  What’s worse, costs are even higher for the next two school years ($13.9 and $13.8 million).  That’s the bad news.

The problem is that the school district is under a great deal of financial stress right now. Last year’s budget included cuts to all school buildings, the use of reserve funds, yet still required a tax increase.  The coming budget looks like more of the same:  Employee retirement benefit costs are estimated to rise again by almost 15% — an amount set by the state but borne by local taxpayers.  The district is also required by law to hire two additional special education teachers because of rising enrollment in special education programs.  This is all on top of the fact that the politicians in Harrisburg continue to hold up funding to local school districts, which makes up almost 20% of East Penn’s revenue.

In order to at least partially address these issues, the district administration has put forward a proposal to restructure some of the district’s debt.  The restructuring would provide immediate debt relief over the next couple of years, freeing up millions of dollars that could be used to cover these other costs.  But alas, there is no such thing as free money.  The restructuring would actually cost taxpayers more money in the long run — to the tune of about $200,000. The current restructuring plan produces short terms savings but at greater overall cost in the long term.

There are some very good reasons to adopt this restructuring plan:

On the other hand, there are also some very good reasons to reject the restructuring plan:

Let me say a little about this last point, because it’s important: In two years, the district will pay $5.8 million less in debt payments. That “extra” $5.8 million could be used for initiatives of importance to our community.   A tax cut, for example.  Or a program to ensure every child has access to a computer at home.  Or all-day kindergarten. If we restructure the debt now, the district will only realize a debt savings of $2.7 million in 2019. That money, while significant, won’t stretch as far for community priorities. ​It certainly seems to me that this is an issue over which intelligent people can disagree.  It is a tough call, with merit on both sides.  What do you think?  Let me know your thoughts in the comments below, by email, or by attending and speaking at the board meeting tomorrow night (Monday, February 22, 7:30pm).

PS: There is an important distinction between this restructuring proposal and the debt refinancing the district has done several times over the last two years.  The refinancing has lowered the interest rate the district has to pay on its debt, saving taxpayers hundreds of thousands of dollars each time.  These are real savings. By contrast, the restructuring plan gives us short term relief but at a greater overall expense.