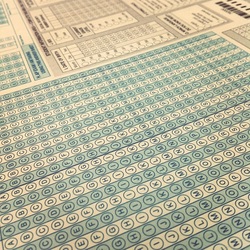 Two recent issues in our school district– the tough budget and the many snow days– have reminded me of the many concrete ways in which the relentless obsession with standardized testing hurts our ability to provide the highest quality education to our children.

Wasted Money
In terms of the budget, the harsh winter has added to the usual list of factors demanding our district’s dollars.  It is in this context that Governor Corbett has proposed increasing state spending on standardized testing by 8.6% next year, to over $58 million.  By contrast, his administration has proposed zero increase to basic education, for funding things like more teachers, new textbooks, and better lab equipment.   Instead of helping local taxpayers afford the things that can improve learning, the Corbett administration is focusing on those things that (sort of) measure it.  State spending on these tests is only a small part of the overall education budget, but is still millions that could be put to far better use in the classroom.  Or even to help defray the extra snow removal costs this year.  (An interesting sidenote that adds some insult to injury: a good portion of that $58 million for standardized testing will go to the Data Recognition Corporation, a private firm in Minnesota to which the state outsourced the development and administration of our standardized tests.)

Wasted Classroom Time
In terms of snow days, bad weather has led to schools being closed now on eleven different occasions, and delayed school on many more.  It is in this context that I took a look at the recently revised school calendar for the rest of the year.   By my quick count, there are a total of 69 instructional days left, and standardized testing is scheduled for 25 of those.  That’s right: our schools will be focused on standardized tests more than one out of three of the remaining school days.  To be fair, not every student will be taking tests on every one of those days.  But many will.  And those 25 days don’t include the substantial time devoted to teaching the mechanics of the tests and the best strategies for approaching them.   Imagine how much more could be accomplished in the classroom this year if even half of all the time set aside for standardized testing in the coming months were freed up for real instruction in science, math, language arts, music, and other substantive subjects of value.  Or enrichment programs that build on the curriculum already being implemented.  Or, frankly, just reading a good book.

Where to Go From Here
Don’t get me wrong, I’m not opposed in principle to standardized tests.  They can play a useful role in student placement, program evaluation, and so forth.  The problem is that these measures of instruction are quickly becoming the goal of instruction itself.  This is reflected in where our money goes and how the precious few hours in the classroom will be spent over the remainder of this school year.

What can be done?  Some parents in Pittsburgh are simply opting out of standardized testing, but I suspect a more collective effort is needed for significant change.  I welcome your ideas about concrete things we might do at the local level to resist the takeover of these tests.  And if you are interested in learning more about the impact standardized testing is having on our schools, please attend a forum of Muhlenberg College faculty who will present research findings on the impact of No Child Left Behind, the 2001 federal law that greatly accelerated the push to reliance on standardized tests: Thursday, March 20th, at 7pm at the East Penn School District administrative office, 800 Pine St. in Emmaus.