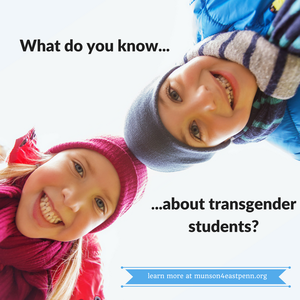 My post on the trumped up transgender bathroom controversy at Emmaus High School got a bigger response than anything I’ve ever put on this blog.  If you’re like me, you probably didn’t grow up around many people who were openly transgender and very well might not have friends or family who publicly identify as trans.  One of the chief sources of uncertainty, fear, and controversy around transgender students in our school district stems from this lack of knowledge and familiarity.  Here are the most helpful things others have sent me to help overcome such uncertainty and fear…

A short but moving description from a mother of a trans girl who makes clear that the issue is about the dignity and worth of our children, not political correctness:

A father– Republican, National Rifle Association member, and military veteran– discussing the difference between his twins, one of whom is trans:
An explanation by a trans girl helped me walk a few minutes in her shoes:
A more local perspective is provided by a recent feature story by the Morning Call, which profiles the journey of two Lehigh Valley trans students and offers some helpful definitions of different terms used in discussion of sexual identity.

One doesn’t have to agree with everything the speakers in these videos and article say to agree with the hope that all our children have the right to claim their own authentic identity and not have one forced on them by outside social norms or peer pressure.

Okay, I’ll fess up and say that I don’t know if there are seven things to be learned here, or twenty things, or three.  But if you’re like me, you certainly learned something.