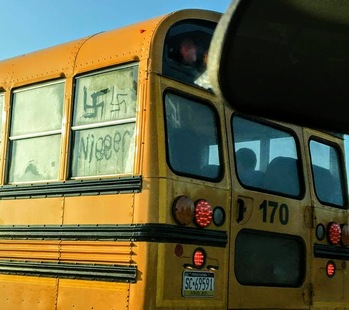 ​I learned this morning that someone drew two swastikas and the n-word on an East Penn school bus yesterday. A passing motorist took a photograph and alerted authorities. The school district issued a press release this afternoon, saying it “denounces and prohibits this type of racial harassment and is in the process of conducting a full investigation.” Our district thus joins others in the area confronting such displays in recent weeks. Southern Lehigh High School has been host to a number of openly racist and homophobic slurs this school year, including students using the Hitler salute. At Saucon Valley, a white student posted a video of a black classmate eating chicken which he narrates using the n-word and series of racist stereotypes. These are a part of a much longer list of incidents that have been reported throughout the Lehigh Valley, both in and outside of schools.

Racism and anti-Semitism, of course, are nothing new. Nor is graffiti such as that witnessed on the East Penn bus. But over the last year these kinds of public expressions have become more common. The FBI reports that hate crimes were up 6% last year, with African-Americans and Jews being the most frequent targets. Anti-Muslim hate crimes were up 67%, the greatest increase in fifteen years.

Regardless of who drew the graffiti on the school bus window or what their motivations were, incidents like this represent a real danger to our community. Words matter. And these kinds of incidents should not be accepted as normal. The swastika and n-word represent– very directly– the anti-Semitism and racism that have characterized some of the darkest moments in our history. I have heard some say that we should ignore these kinds of incidents, either because they are petty, or to avoid giving the perpetrators the attention they seek. I agree with this approach in many cases, but not in this one. Sometimes silence is dangerous. The rise of the Nazi party in Germany in the 1930s was characterized by the appearance of similar (and also seemingly petty) graffiti. The n-word continues to be used today to incite violence against African-Americans, just as it was closely associated with lynching in the past. The need to confront, rather than ignore, this type of incident is particularly important in our district, where minority students represent only a small fraction of the population (4.2% are African-American) and are thus particularly vulnerable to racial and religious intimidation.

So how can we use this incident to help our kids and our community do better? I’m no expert here, but I’ll tell you what I’m going to do with my own kids:

#1 Give them information:
We might all be forgiven for wanting to shield our kids from the harsh and brutal truths behind these symbols. But I think kids need more information, not less. Kids lack much of the background and context needed to understand why such symbols are provocative or shocking or dangerous or scary. Simply telling them they are taboo is not enough; giving them knowledge helps both strip the symbols of their power and make sense of a complicated world. I’m going to explain to my kids the historical significance of these symbols, and what kinds of groups use them today.

#2 Give them tools:
I am going remind my kids that if you see something, say something. This is the phrase used by the Department of Homeland Security to encourage reporting evidence of terrorism. But the same idea applies in the far more common circumstance of witnessing acts of racism, anti-Semitism, or other forms of hate. I will remind my kids that saying something can be hard, because calling out such ugliness can be socially awkward and invite retaliation. But it is precisely the silence that allows a wrong to continue and grow. I’ll highlight for my kids the good example set by Sonia Tapiarz, the woman who reported the East Penn bus incident to authorities. She could have easily just shook her head in disgust and went about her day. But instead she took the time and effort to document what she saw and alert us. As a result of her saying something, positive change can perhaps now come out of the incident.

#3 Give them empowerment:
I am going to ask my kids about their opinion of the graffiti incident. I’m going to encourage them to ask lots of questions, and help them them find answers on their own. I want them to know that they should not stand by passively as events in their community unfold. I want them to a part of those events, bringing their own values, perspectives, knowledge and skills to the table.

#4 Give them examples:
I am going to tell them about the steps I am taking in response to this issue. Step one is sharing this post with the larger community. Step two is writing the East Penn Superintendent, Dr. Mike Schilder, directly. I am going to share with him my belief that students in our district will learn important lessons from how he leads the district in its response to this incident. I am going to remind him of his responsibility as the most visible educational leader in our community. And I’m going to ask him to use his expertise as both an educator and leader to teach our students about what swastikas and the n-word represent, how they can be dangerous, why incidents like this are happening now, and what concrete steps the district is taking to confront them.

#5 Give them resources:
I am going to ask my kids to find a community organization devoted to addressing the issues of racism and anti-Semitism to which we can make a donation of our time or money. They will see how our family can work with others to make such incidents less likely in the future. I want my kids to gain experience advocating for some of the core values that serve as the bedrock of our community– chief among them the fundamental humanity and dignity of us all.

We should not put our heads in the sand when it comes to issues like this, or dismiss the significant concerns they raise as just “political correctness.”  As the conservative philosopher Edmund Burke famously said, “the only thing necessary for the triumph of evil is for good men to do nothing.”   I would add that evil doesn’t come all at once; it sneaks up on us, little by little, with many of those involved not even aware they are caught up in it.

8 thoughts on “﻿Confronting the Ugly”