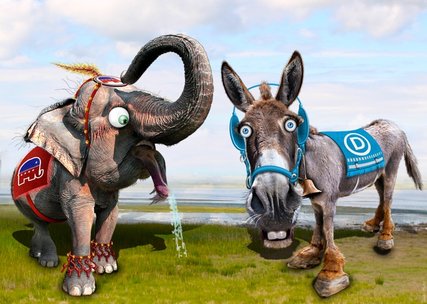 I know a lot of independent voters.  People in the community who vote based on issues and candidates rather than political party, and who– as a result– are uncomfortable registering officially as a Democrat or Republican.   In fact, I was one of those people until just a couple of years ago.

But then I learned how the Democrats and Republicans in Pennsylvania have conspired to keep independent voices out of our local school board elections.  This changed my mind.  And if you are an independent voter, I want to take at least one stab at changing your mind too. I say critical because local elections are where your voice makes the most difference as a voter.  Critical too because in the East Penn School District, who wins and who loses school board races is almost ALWAYS decided in the primary election.

Do you see what the major political parties have done there?  By limiting voting in school board primary races to only registered Democrats and Republicans, they cut out the voice of independent voters completely.  And given that primary voters of both major parties tend to be more ideological and more extreme than the general population, this means we get more ideological and more extreme school board members as a result.

Independents, we need your voice back in the process!  This is why I urge you to officially register with the state as a Democrat or a Republican.  This is the only way to make your vote count.  Doing so doesn’t define your identity or how you vote.  But under current election rules, it DOES define whether you can vote at all in the upcoming school board primaries on May 16th.   This is something I’m passionate about, because I believe we need independent voices on our school board that will make careful decisions based on the facts, rather than simply repeating partisan talking points at local school board meetings.

The deadline for registering– including officially changing your party status- is April 17th.  You can do it easily online right now at: https://www.pavoterservices.pa.gov/Pages/VoterRegistrationApplication.aspx

So, did I convince you?  Don’t let the major political parties use your independence to keep your voice out of our school district.  Register as a Democrat or Republican today! Register by April 17th to participate in the May primary election.

2 thoughts on “Independent Voters Read This!”