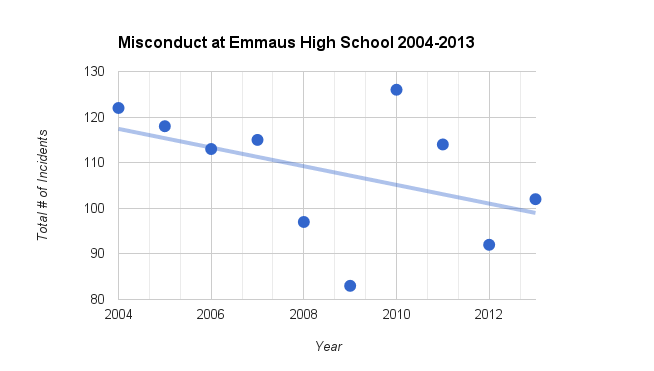 This is the first of three pieces I will post over the next three days focusing on the issue of SROs.

The East Penn School district administration has asked to hire a school resource officer (SRO) for Emmaus High School, at a total cost of approximately $100,000 annually. An SRO is a police officer who has additional training in working with juveniles and schools.  I do not support hiring an SRO for the district right now, in part because the perceived need for one rests on a myth about public– and school– safety.  Let me explain.

Newspapers, television and radio all offer us a constant drumbeat of threats to our safety.  The news is often little more than a catalog of murders, assaults, robberies, and other crimes happening around us.  Social media like Facebook and Twitter support this drumbeat by letting us all “share” stories of the dangers of the modern world.  Those of us that closely follow the news can therefore be forgiven for believing– as half of all Americans do— that violent crime has increased over the last two decades.

But this is a myth.  We are bombarded by news of crime because such stories sell papers, not because such incidents are on the rise.  It simply isn’t true that crime and violence are increasing in our society.  And much of the support for adding a police officer in the high school is predicated– often implicitly– on this false sense that our communities and schools are less safe today than when we were in school ourselves.

Let’s look at the reality.  Nationally, violent crime has dropped dramatically over the last two decades.  Today, we are less than half as likely to be a victim of violent crime than we were two decades ago.  And this national trend holds locally too.  Last night I pulled the crime statistics for just Lehigh County from the Pennsylvania Uniform Crime Report System.  What do they show?  Last year crime was at its lowest level in at least a decade. (You can click on all the graphs below to see the underlying numbers; the lines on each graph are generated automatically to show the overall trends in the data). But what about schools?  It is reasonable to ask whether our schools are becoming more dangerous even as our communities become safer.  But this too is a myth.  Schools are safer today than they’ve been in decades.   Detailed information about school crime and safety from the National Center of Education Statistics shows that the chance of students being a victim of a crime in school is down more than 72% from its high in 1993.  Wow! This is great news, of course, but what we really care about is our own schools right here in East Penn.  Using data from the PA Department of Education’s Office of Safe Schools, I created the following graph showing the incidents of misconduct at Emmaus High School.  The results show there has been no increase in misconduct over the last decade that might require a police officer’s assistance; the overall trend, in fact, is downward.  The data on individual types of misconduct, such as assault, are similar. None of this suggests that violence and crime have disappeared from schools entirely.  As parents and as community members, we want to make our children as safe as possible.  Therefore, it is worth asking whether an SRO would improve safety even further.  Tomorrow, I will address this question directly.  Unfortunately, the evidence shows that SROs are not effective in making schools safer.

In addition to the many links above, I suggest the following if you are interested in learning more about crime and school safety:

3 thoughts on “The Safety Myth”