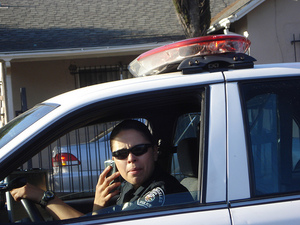 This is the second of three pieces I will post this week focusing on the issue of SROs.  The first focused on the myth of increasing school violence; schools are safer than they’ve been in decades.

The East Penn School district administration has asked to hire a school resource officer (SRO) for Emmaus High School, at a total cost of approximately $100,000 annually.  An SRO is a police officer who has additional training in working with juveniles and schools.  I do not support hiring an SRO for the district right now, in part because the data shows that hiring an SRO does not achieve the goal of greater safety.

The strongest arguments in favor of an SRO is that it makes a school safer.  An SRO can be proactive, and thus might be able to deal with discipline issues before they get out of hand; they might serve as a deterrent to criminal activity on schools grounds; and they might help educate or even mentor students in ways that keep them out of trouble.   The logic certainly makes sense, and I believe the administration is sincere in its belief that an SRO can help in these ways.

The trouble is the research on the effectiveness of SROs in schools simply does not bear out these benefits.

Research Results: There is “no evidence suggesting that SRO or other sworn law-enforcement officers contribute to school safety.”

The most compelling data on this issue comes from a peer-reviewed publication by scholars at the University of Houston and the University of Maryland.  They use data drawn over time from almost 500 schools around the country, some of which had police in the schools, others that didn’t, and still others that started with no police officers and then added them.  They conducted statistical analysis of the data that allowed them to ask how effective SROs were in the schools, controlling for other factors such as the size of the school, the poverty rate in the school, and so forth.  What did they find?  There is “no evidence suggesting that SRO or other sworn law-enforcement officers contribute to school safety.”  In other words, as much as we might want SROs to serve as a deterrent in schools, to be proactive in preventing crime, and decrease violence through mentoring and education, they have not had this effect in the hundreds of schools that have tried them.

An internet search will certainly turn up reports claiming SROs in schools are effective, thus contradicting this research finding.  But if you actually read such reports, you find that “effective” is defined in such claims merely as “popular, as measured by opinion surveys.”  This pattern led the U.S. Department of Justice report to conclude in 2010, and the Congressional Research Service to repeat in 2013, that “studies that report positive results from SRO programs rely on participants’ perceptions of the effectiveness of the program rather than on objective evidence.”

Pennsylvania Report: There are “no notable differences” in either violence and weapons incidents, or in truancy rates, between PA schools that hired SROs and comparable schools that did not.

A good example of this is the PA Commission on Crime & Delinquency’s 2005 evaluation of SROs in Pennsylvania schools, including several schools in the Lehigh Valley.   If you were to read just the report summary, you would learn that support for SROs is “strong” and that they are “effective” in reducing the incidences of crime.  But the body of the report makes clear that these conclusions are based solely on surveys of what school officials perceive to be happening, not actual evidence of a real decline in criminal incidents.  Moreover, buried in the middle of the report (pp.68-69) is analysis of hard data on student behavior that is not even mentioned in the summary.  This analysis took each Pennsylvania school with an SRO in the study and compared it to three other schools that were similar in terms of location, student characteristics, and so forth to see if the schools with SRO officers lowered their rates of crime or truancy.  Contrary to the findings of the opinion surveys, the report found there are “no notable differences” in either violence and weapons incidents, or in truancy rates, between PA schools that hired SROs and the comparable schools that did not.

To summarize: Existing research shows that SROs in schools increase the perception of safety, but do not increase the actual safety of schools.  There is certainly lots of room for additional research on this topic.  I did an exhaustive search for high quality studies and was frankly surprised how little had been done, given the importance of these programs and the level of taxpayer funding they now command.  More research is needed, but the best available data to date suggests that hiring an SRO officer will not increase safety at Emmaus High School.

None of this data suggests that local and state police departments aren’t important to school safety.  In our own district, police departments have good working relationships with district officials and assist the schools when there are problems.  I hope that continues!  What the data does show is that schools themselves should not get into the policing business.

I acknowledge that the lack of conclusive research means reasonable people may disagree on this issue.  And I respect  that many people have had good experiences with SROs and good reasons for wanting one for the district.   The issue of school safety is very personal to me too; my daughter will attend the high school next year.  I therefore can’t help thinking about SROs not just as a school board member, but as a father.  But the desire to keep our kids safe shouldn’t blind us to facts, and the best research-based evidence we have right now makes it difficult to justify hiring an SRO.  The data show that such a hire will not accomplish the goal we all share: making schools safer.

Tomorrow’s post: While objective data suggests SROs do not make schools safer, there is some evidence that they can cause a number of harms, even when officers are highly trained and excellent at their jobs.  I will address this issue in my post tomorrow.