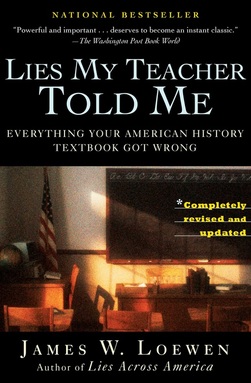 I saw a lot of pithy slogans and clever picture quotes on my social networks yesterday pointing out that the voyages of Christopher Columbus, which we celebrate with a national holiday, also brought with them evils like racism and genocide.

Fair enough, and true enough.  But one of the things I find tiring about these kind of online slogans, on subjects ranging from Columbus Day to gun control, abortion to celebrating Christmas, is that they so often reduce our rich and fascinating history to a few sound bites meant to “prove” that one view of the world is better than another point of view.

With this in mind, let me recommend a book that strongly influenced my ideas about  education when I read it more than fifteen years ago: Lies My Teacher Told Me, by James Loewen.   The book is based on the author’s careful study of the twelve history textbooks most commonly used in American high schools, including all three textbooks being used in American Studies I and II at Emmaus High School.  Based on this research, Lies My Teacher Told Me is a critique of the way American history is taught in our schools.

The book devotes a chapter to Christopher Columbus and the European discovery of the Americas, showing how many of historical figures, events, and motivations that are most important to the story never appear in our textbooks.  Students are left with a strong sense that Columbus was a hero, but very little sense of the actual history of that time.  “When textbooks paint simplistic portraits of a pious, heroic Columbus,” Loewen concludes, “they provide feel-good history that bores everyone” (p.90).

My favorite section of the book, however, is the focus on Helen Keller in the introductory chapter.  I knew what most Americans do about Keller:  She was a blind and deaf girl whose drive and determination allowed her to overcome these handicaps and bravely fight for womens’ right to vote.  It turns out that all of that is true.  But reading Loewen’s book was the first time I learned she was also a radical socialist who actively and publicly promoted communism in the United States for much of her adult life.  My own history teachers in school never taught me that!  As Loewen describes, “historians and filmmakers have disregarded her actual biography and left out the lessons she specifically asked us to learn from it.  Keller, who struggled so valiantly to learn to speak, has been made mute by history” (pp.12-13).

What makes Loewen’s book powerful, however, are not his corrections to the sanitized history presented in our school textbooks, but his clear explanation for why this problem matters to all of us.  History textbooks, he argues, have been written to make historical figures into heroes and villains in the mold of Disney or video game characters: consistent, one-dimensional, and easy to understand.  This telling of history is not only boring, but also dangerous because real heroes (and villains) never look like these caricatures.   Helen Keller was heroic in many ways, but she also had many flaws– like all of us, and like all heroes.  Lacking knowledge of the richness, contradictions and tensions in historical figures makes it hard for students to identify heroes and villains in their own lives, or in themselves.
​
Lies My Teacher Told Me has its weaknesses like any book.  It can be repetitive at times, does not provide a comprehensive history of its own, and is too preachy for my tastes in some places.  But overall it offers an engaging and eye-opening look at not only some central stories in American history, but also the many motivations and purposes that define our textbooks aside from teaching historical realities.  You can pick up a copy for yourself at the Emmaus Public Library, the Lower Macungie Library, or order one from our district’s only independent bookstore, Let’s Play Books.  Happy reading, and let me know what you think!